I wanted to write out my process for the Sketchfab contest, "Collision: Nature & Civilization". For this challenge we were asked to pick a moment in time and tell a story about our complex relationship with nature and technology. The conversation of technology and nature is an important one, especially in recent years. With global warming become an increasingly dire problem, we need to make serious efforts to protect our carbon absorbing natural resources, as well as create infrastructure that encourages both individuals and countries to reduce their carbon footprints and use renewable energy.

I wanted to do something along the veins of Solarpunk, a genre of speculative fiction that envisions how the future might look if humanity succeeds in solving current challenges with an emphasis on sustainability and renewable energy. Some works that fall under this genre include Studio Ghibli's Castle in the Sky and Nausicaä of the Valley of the Wind and Disney's Treasure Planet. More recently is this Chobani commercial, which features a futuristic society where technology and nature exist in harmony.

When thinking about sustainability, the color green pops into mind quickly! I like the idea of trees growing in a city, with a golden light. I also wanted to incorporate water into the piece as well, because I lived for years in a city next to the ocean and a river. One of the images on my moodboard that stood out to me was a series of man-made islands with trees growing out of them. Instead of islands, I liked the idea of tiered canals, with water wheels to generate energy between each tier, and boats used as transportation instead of cars.

For the format, I wanted something that would look appealing as both a 3D piece you can view in Sketchfab, as well as its own illustration. I drew inspiration from the artist Cheryl Young and the game Monument Valley! I found some Monument Valley levels that incorporated waterfalls, and it was nice to see how simple and efficient they were made. I also like the game's approach where they tried to make every level look like a framed piece of art.

I wanted to write a small story to go along with the image. I'm not much of a wordsmith, but I find there is a charming sincerity when it comes to writing letters so I chose that as my format. My first draft of the letter was written from this time period to the future, wishing them clearer skies and fresher air. But I found that it felt too vague and impersonal to make it feel like a story. I changed the direction to someone who recently moved to a new city writing a letter to someone back at home, detailing some of the energy advancements of the city. It's still quite vague in terms of the relationship between the correspondents and their current situation, but I like it when the reader can come up with their own interpretation. The letter had to be edited down after uploading the project to Sketchfab, because there's a character limit haha!

To my dearest friend,

I miss you terribly and often find myself wishing you were here with me. It's a silly thought.

It has been some time since I moved to this city and it's been a nice distraction. The solar panels here are just like glass, and it has become fashionable to decorate buildings with solar domes. More and more of them get built every day; soon there will be more solar domes than waterways! The canals here are beautifully maintained, although the waterwheels need to be occasionally checked to make sure nothing gets stuck in them. They're really strict about pollution, since we rely on both the water and the sun for energy here. It's some trouble, but it's nice to keep things well maintained.

Lots of people pass by because of the boat stop next to us. The people here are so kind and they often smile when they send letters at the office.

I feel like the air is fresher here. You would have loved it.

I really do miss you. 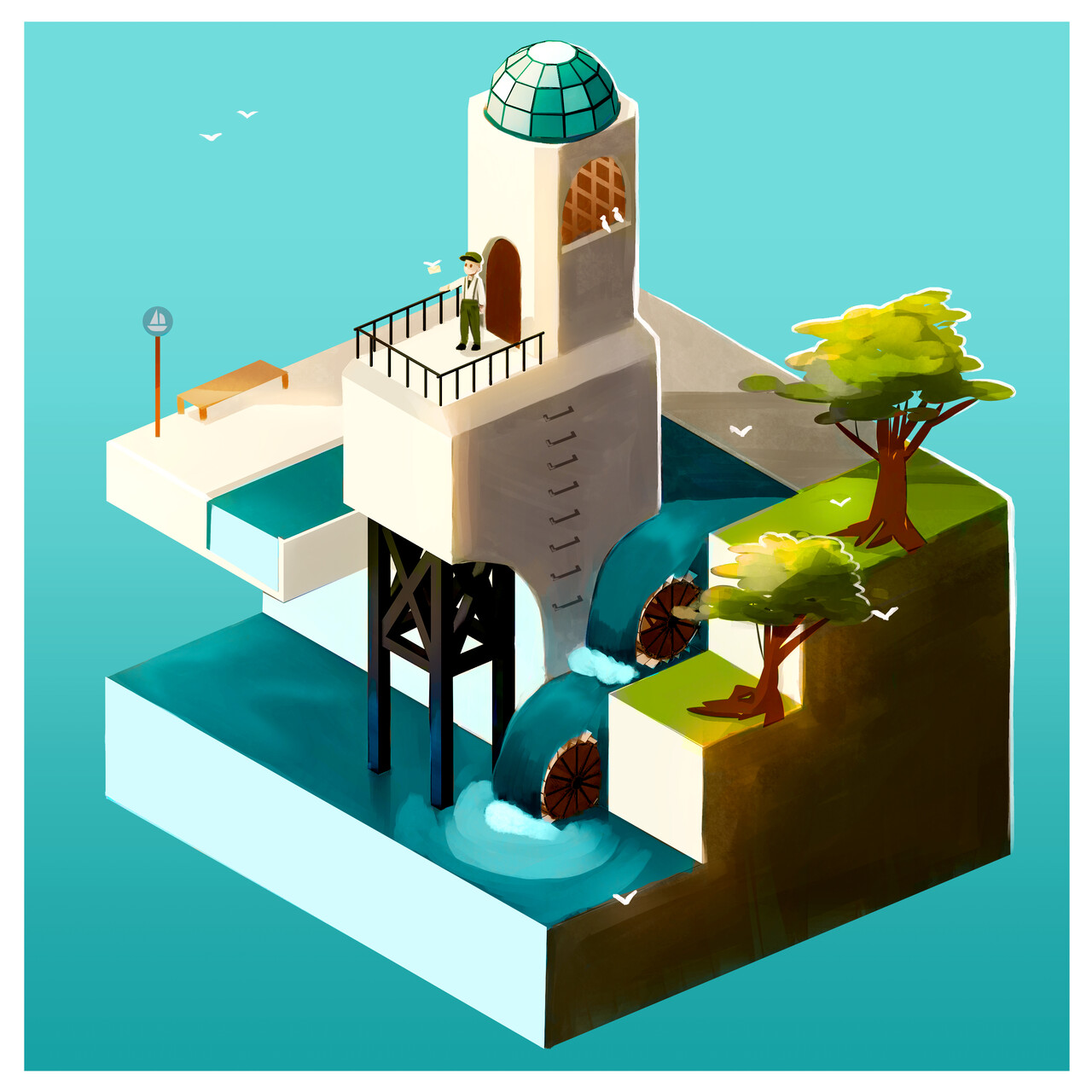 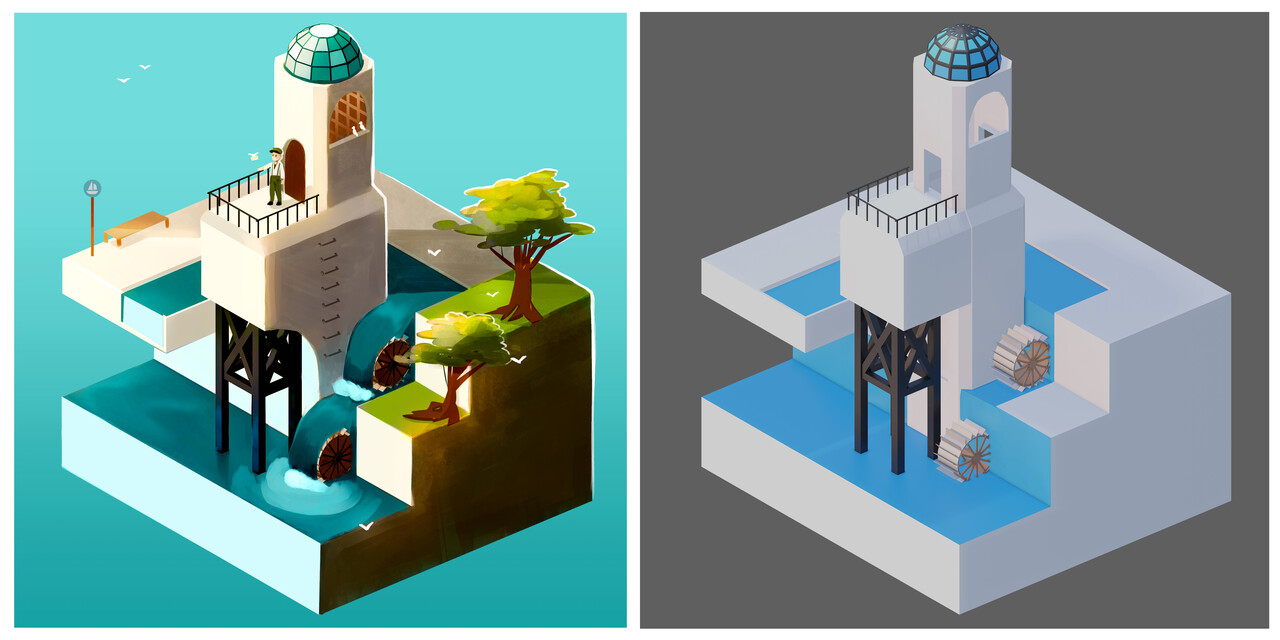 I made a block out model in Blender that had all of the elements I had in mind: a tower, a tiered canal, and water wheels. I then brought the block out into Clip Studio Paint to paint over, adding some details and adjusting the colors. For the colors I wanted to have highly saturated greens, and blue water that had a bit of a green tint. The light is a warm gold! The final image ended up being less cluttered than most Solarpunk art, and more along the lines of Monument Valley in its simplicity. I like the texture of my brushstrokes and aimed to keep that in the final model as much as possible. 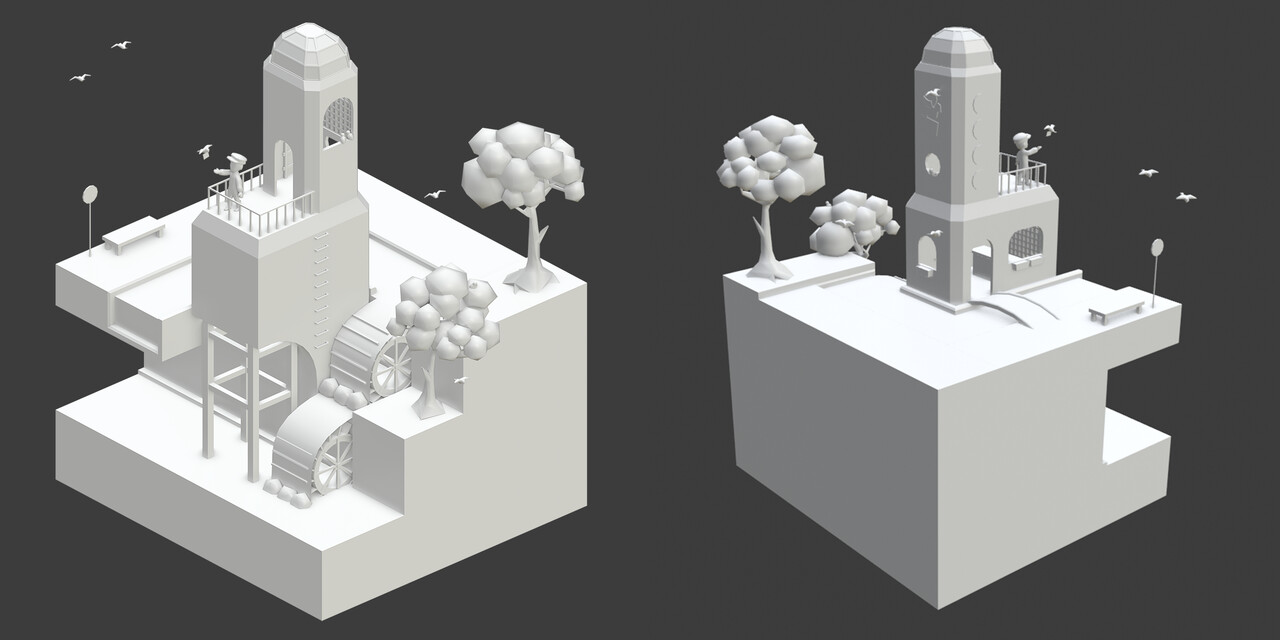 Here is the final block out! Some details were changed or adjusted from the sketch, like the shape of the dome, since I continued to make decisions as I modeled. In the sketch I tried to keep the figure at more realistic proportions, but I changed it to something more stylized and cute in the model. I still kept the figure a size that made sense for the whole scene though! He can fit through the doors and the desk is the right height for him as well. The scaffolding was simplified because it was getting distracting and drawing the eye too much. Hopefully now the eye goes directly to the figure first. Because this piece was going to be uploaded to Sketchfab, I also made sure the reverse side of the diorama had some detail, even though it won't be seen at the final angle. 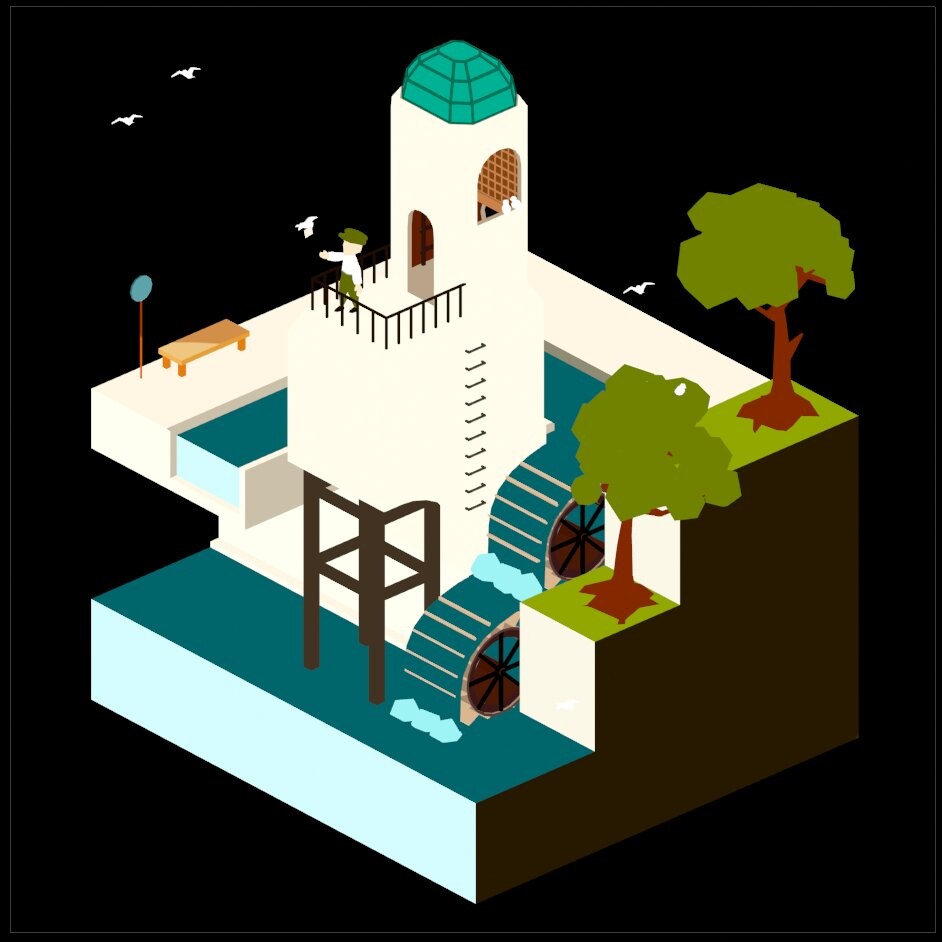 I blocked in the colors, color picking from my sketch. I decided to go with an unlit render and just paint in the light and shadows so the final product will look closer to my sketch. When painting, I used this brush pack to get similar brush strokes to the sketch. 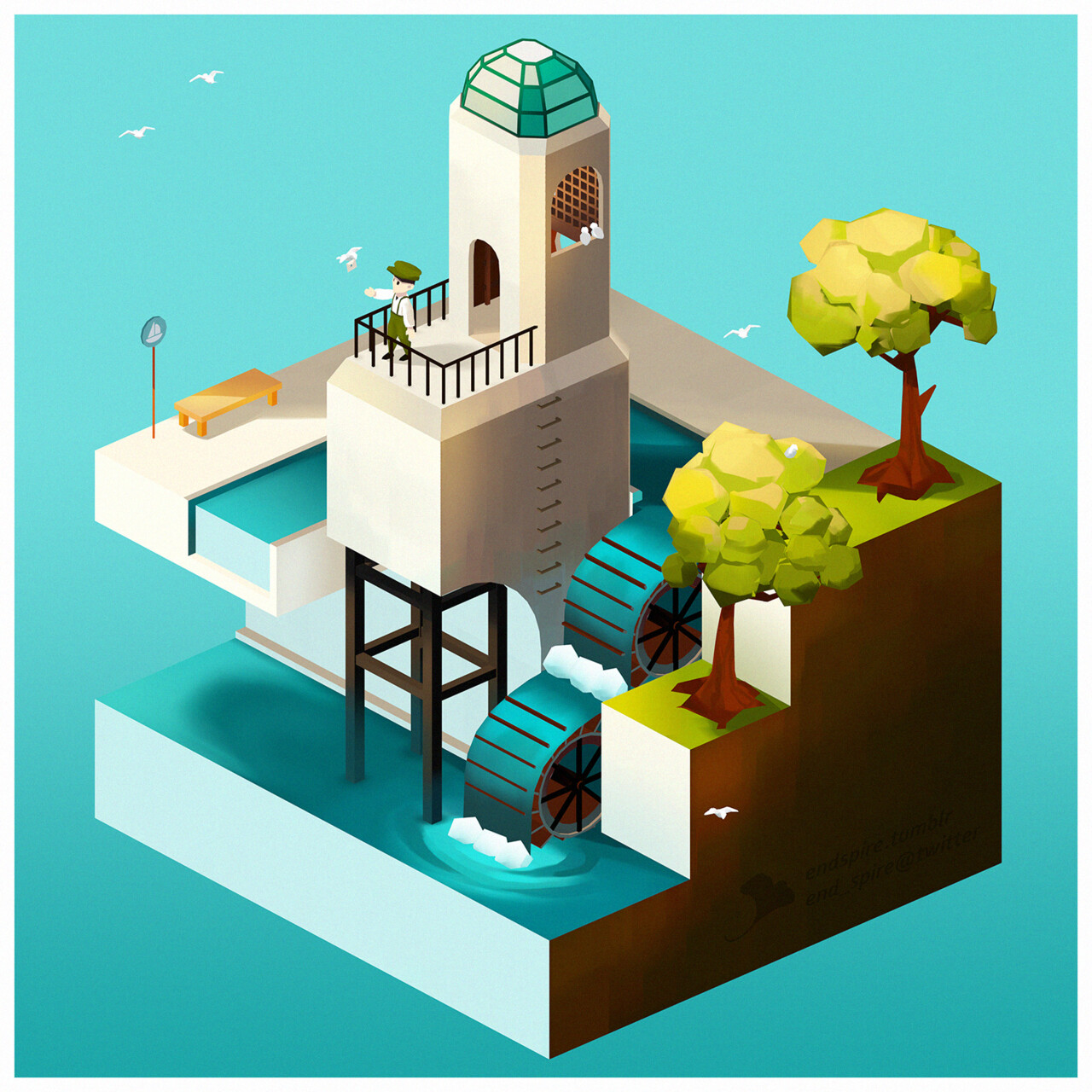 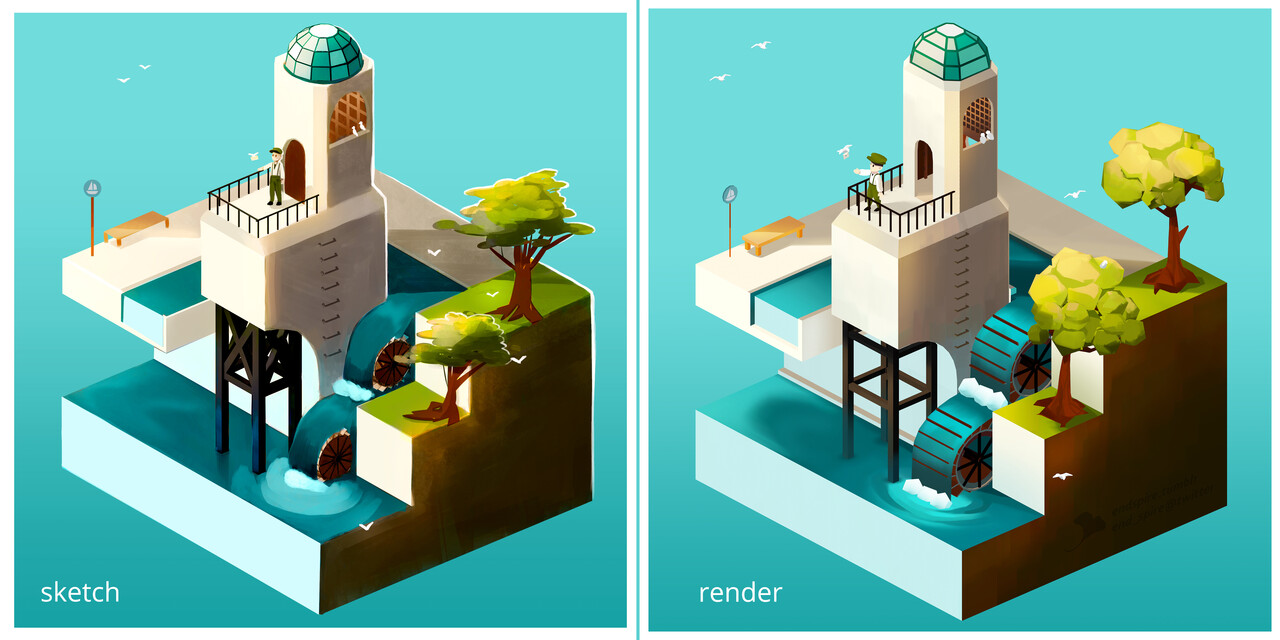 The final image! I'm pretty happy with how close I got it to my initial sketch and really enjoyed the process of painting in the forms. I'd like to try more projects in this style in the future.